We just returned from the Magic Kingdom in Orlando, Florida. The Magic Kingdom is truly a magical place especially when seen through the eyes of a 4 year old experiencing the world of Disney for the very first time – seeing the smile on her face as she watches Mickey and Minnie Mouse making their way down Main Street in the Christmas Parade, seeing her eyes big as she captures the spectacular fireworks over the brilliantly lit up castle, hearing her ask over and over, “Can we go on ‘It’s A Small World’ again?” because it is her favorite ride – just like her Mommy Jill. Yes, the Magic Kingdom is truly a magical place.

In 2018, increasingly in liturgical circles it is becoming politically incorrect to talk about the “kingship” of Christ. Such a term brings with it the baggage of patriarchy, colonial exploitation, and abuse of power. In our day, words of like king, kingdom, and kingship are becoming politically incorrect. Yet, this morning, I would like to travel back to the first century and ask what did it mean back then to call Christ king?

Jesus was born during the time of Herod the Great who was called the “King of the Jews.” Jesus was born when the Roman Emperor Augustus Caesar was in power. Titles for Caesar Augustus included “Son of God”, “Lord”, “Redeemer,” “Savior of the world”. Jesus was born into a domination system characterized by unjust economic relations, oppressive political relations, biased race relations, patriarchal gender relations, and hierarchical power relations.

Jesus was political. And for him it was personal. For Jesus himself was a poor Palestinian Jew born under Roman rule, born in a scandal. Mother Mary was shamed. Father Joseph was dishonored. Remember Mary was pregnant out of wedlock. Jesus was a poor, marginalized outsider who was born in Nazareth out of which nothing good comes. Jesus was a refugee, fleeing his country because of political persecution, brown enough to go under cover in Egypt. It is to the poor, marginalized outsider that Jesus comes sharing a message of God’s radically inclusive love.

As followers of Jesus, what does that mean for us today? It means that we, too, are to take a stand for love and compassion. Instead of acquiescing to political systems that have sanctified institutional dehumanization, we are called to create a new polis.

As we look at today’s scripture passage about baby Jesus, Mary and Joseph fleeing in to Egypt as asylum seekers, I think about the caravan of asylum seekers making their way through Central America to Mexico to the United States. How will we respond when they reach our country?

I was particularly moved by this visual on the front lawn of an United Church of Christ. Mary, Joseph, and baby Jesus incarcerate inside separate fences – baby Jesus in one section, his parents Mary and Joseph in another. The artistic display of a nativity scene by Parkside Community Church, UCC, in Sacramento California is a visual call for change in current US immigration policies. But it also underscores a grim reality. The stories of families fleeing violence is as old as the story of Jesus himself (Connie Larkman, “A California Church Jails Baby Jesus,” July 18, 2018). 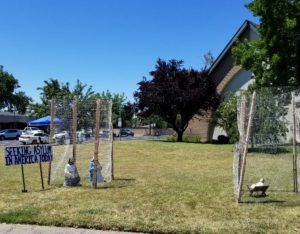 Rev. Elizabeth Griswold, the Pastor of Parkside Community Church said this, “We feel it is our duty to use our Christian voice to connect that biblical story to the stories of families facing similarly harrowing experiences today. Since every family is a Holy Family, how hideous it is to see our sisters and brothers from the south separated and locked up.”

In scripture, we hear Jesus ask, “When I was hungry did you feed me? When I was thirsty did you give me something to drink? When I was naked, sick, or imprison did you care for me? As you did to the least of these you did to me” (Matthew 25: 31-46). Of course, this describes the social location of many migrants and refugees: hungry in their homelands, thirsty in deserts they attempt to cross, naked after being robbed of their possessions, imprisoned in detention centers, sick in hospitals, and if they make it to their destination, they are often estranged and marginalized.

Undoubtedly, immigration is one of the most complex issues in the world and as followers of Christ, as people of faith we are called to wrestle with the complexity and speak up for a polis based on love and compassion. Our larger denomination, The United Church of Christ, has encouraged each UCC congregation to adopt the resolution to become an “Immigrant Welcoming Congregation.” Our RUCC Board adopted that resolution a few months ago. Copies of that resolution are available for you in the Narthex.

Moreover, our Southern California-Nevada Conference of the UCC issued this statement: We, the Southern California-Nevada Conference of the United Church of Christ, stand in solidarity with all who are forced to flee violent conditions that make life in their home countries untenable. We include traditional ways in which refugee status has been recognized- fear of political, ethnic and religious persecution, as well as urging the United States government to continue to include persecution due to domestic violence, gang-related violence and the fear of drug smugglers as valid reasons for seeking asylum in the United States. We repent for the ways our own government has caused the conditions from which people flee from Central America due to decades of systemic political de-stabilization in the region. We support and pray for the current immigration “caravan” approaching our Southern border. Through the faith we claim that calls for welcoming the foreigner and stranger among us, as well as to actively assist the “least of these our neighbors”, we urge our government to uphold both U.S. and International Law by allowing entry, safe passage and humane treatment to all asylum seekers who present themselves at all points of entry at our borders.

In a further attempt to explore the topic of immigration, a group of us from RUCC will go to the Arizona border in January where we will work with the Good Shepherd UCC to learn about the plight of migrants and refugees and help to assist those who are thirsty, hungry, naked, sick and imprisoned. For Jesus could have very well asked, “When I was an immigrant, did you welcome me?” Amen.